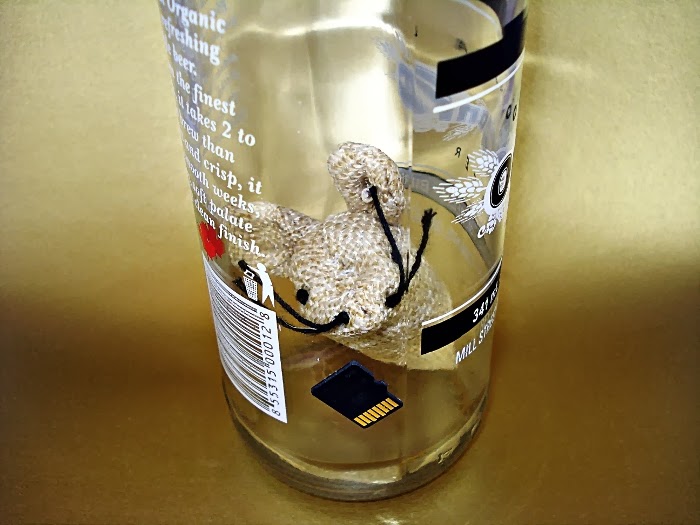 "So where are we going?" said Geoffrey.

"They won't have got to the roof yet," said Pepper. "There's a way off from there."

"One that doesn't lead to a horrible death?" said Cinnamon.

"Not usually," said Pepper. "Follow me." She led them down the corridor to the women's washroom. The small foyer between the corridor and the washroom proper had a utility door in it, which served as the entrance to an electrical closet. Another utility door was at the opposite end of the closet. Behind it was a narrow stairway.

"This goes to the roof," said Pepper. "Bet you a mouse-free beer they haven't thought to cover these stairs. They only start on the twentieth floor."

"Great White implies a master hunter," said Geoffrey, but he entered the stairwell behind Pepper and Cinnamon.

"It's not a shark," said Pepper. "It's a TV show. Remember?" She reached the first landing and let out a long, ululating falsetto call.

"Oh, like those Canadian wilderness mini-documentaries they used to show on the CBC between cartoon shows?" said Cinnamon. "I love the parodies of those... Geoffrey? Oh man, you're not having a heart attack, are you?"

Geoffrey looked up at the two women. Even in the dim blue fluorescent lighting of the stairwell his face looked red, but he was grinning. "I remember," he said. "Hosers and 'take off, eh?' and all that. I loved that show when I was a kid."

Cinnamon glanced up and down the stairs, one of her colleagues to the other. "This is one of those things that would never survive on cable, but you're going to tell me back when you were kids and we only had two stations it was really great, right?"

"Once we get out of this mess, I'll show you on Youtube," said Pepper. "But that show reference alone means the guys with the guns are Canadian, and one of the episodes included instructions on how to raise a mouse in a beer bottle. Then you claimed you just found it there, so you could guilt-trip the brewery into giving you free beer."

Geoffrey ran a few steps to catch up. "Did you ever see the film?"

"Only when it first came out," said Pepper, already another flight ahead of him.

"I think I still have it on VHS somewhere," said Geoffrey. "And the first LP."

"Things you learn about co-workers," Cinnamon muttered under her breath.

"Doesn't really help us any further in figuring what this is about," said Geoffrey.

"Once we get a chance to hit the web, it might," said Pepper. "Let's get back to street level first."

"This plan doesn't have anything to do with parachutes or hang-gliders or anything else like that, does it?" said Cinnamon.

Pepper grinned back down at them and jumped to the next landing. "We are in the middle of the Bay Street wind tunnel."

"No way. Let's double back and shoot our way out instead."

"She's kidding," said Geoffrey, pushing Cinnamon ahead of him. "You are kidding, right?"

"Yeah," said Pepper. "But I gotta say, I'm kind of jealous of that outfit. Pulling your code names from cult TV shows is way cooler than what we do. Belonging to an entire division with names based on the co-ordinator's obsession with British girl bands sucks."

"Not everyone," said Geoffrey. "Susan goes by Meg."

"That's short for Nutmeg," said Cinnamon. "Wow. I thought everyone knew that."

They finished the rest of the stair-climb in silence. Before opening the door to the roof, Pepper warned them that Bay Street or no, they were forty-five stories up and the wind would be bad. They wouldn't really be able to talk on the roof, and they shouldn't really talk on the way down in case they were near patrolling goons.

Then they stepped out into a rooftop gale.

Geoffrey's tie flapped into his face and acted like it wanted to cling to his nose. He loosened it and tossed it away. The lights lining the top of the building illuminated the tie's flight over the edge.

Pepper led them to the west side of the roof, where a window-washer's rig was tied down. Through gestures she instructed Geoffrey to help her move the rig into position and hang it against the side of the building. It dropped an awkward metre past the edge of the roof and held steady.

"This is the worst part," Pepper yelled into Cinnamon's ear. "Sorry, but you're the lightest. Get in and hook yourself onto a safety strap while Geoffrey and I hold the ropes."

Cinnamon climbed over, clutching at the roof when the rig jerked under her weight. She found a safety strap, clipped it to her belt, and gave an "okay" signal.

Geoffrey and Pepper had a brief, gestured argument about which of them should climb in next. Eventually Pepper climbed in the opposite side of the rig from where Cinnamon stood. Geoffrey eased himself into the space between them.

Geoffrey shrugged and crouched against the rig's frame.

Pepper waved to get Cinnamon's attention and mimed how to work the rope controls. They let themselves down gradually, pausing a few times when they spotted movement through an office window further below.

The ropes ended half a storey above the ground. They all helped each other half-jump, half-clamber out.

Pepper ignored her. "Geoffrey, I was thinking on the way down — do you remember the names of those two characters on Great White North?"

"Oh," said Geoffrey. "Um. The Mackenzie brothers. One of them was Bob, and the other one was, um..."

"Hello," said a voice behind them.

Cinnamon tried to grab for her ankle holster as she wheeled around, but Doug shot at the ground just in front of her. She jumped back.

"Don't bother," he said. "You're surrounded. I'm glad that I'm not the only one in the office who has a sense of humour, though. So Ellie, how about that data you were supposed to hand over this evening?"

Bonus links! If you want to chuckle like Pepper and Geoffrey (or be perplexed like Cinnamon), check out the infamous "beer mouse" clip from Great White North below. Wikipedia has an article on the Bob and Doug Mackenzie phenomenon.

Posted by Katherine Hajer at 18:00